Idaho has 240 highway markers, mostly erected 1956-1986. As this signage ages, it’s replaced with more accurate and nuanced markers. As an example, the diary of Scottish explorer John Shaw is included on one sign:

“It appeared to us probably that no human being had ever trodden in that path before. But we were soon undeceived, for we had not been many hours there before my people, going about their horses, found a pheasant (grouse) with a fresh arrow in it and not yet dead. So, at the moment we were indulging in such an idea, the Indians might have been within 50 yards of us!” 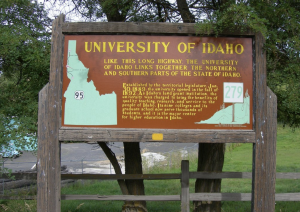