Desmond Meade is a “returning citizen.” He’s gotten many awards of late, including a MacArthur prize. None is more important than what he’s done: “(Florida) Amendment 4 represented the single largest expansion of voting rights in the United States in half a century and brought an end to 150 years of a Jim Crow-era law in Florida.”

The law in WY seems straightforward:  If you were convicted of a felony after January 1, 2010, your right to vote is automatically restored when you complete your sentence, including probation or parole.  You must petition for other civil rights to be restored. 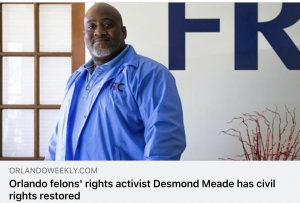