When the US Constitution was being debated in 1787, there were no existent models to be found in Europe. However, many of the designers had personal experience with the democratic government used by the Iroqouis Confederacy.

To quote Ben Franklin: “It would be a very strange Thing, if six Nations of ignorant Savages should be capable of forming a Scheme for such an Union, and be able to execute it in such a Manner, as that it has subsisted Ages, and appears indissoluble; and yet that a like Union should be impracticable for ten or a Dozen English Colonies, to whom it is more necessary, and must be more advantageous; and who cannot be supposed to want an equal Understanding of their Interests.” 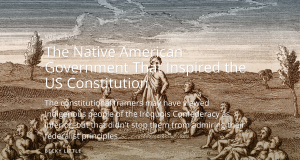 The Native American Government That Inspired the US Constitution