Mary Ware Dennett gained notoriety from a pamphlet she wrote/illustrated for her own sons’ sex education. Ms. Dennett was charged under the Comstock Act (1873) because she mailed copies and received payment for her book. Hers was a modern voice, writing “[G]ive them the facts,… but also give them some conception of sex life as a vivifying joy, as a vital art, … with the understanding of its far-reaching reactions, psychologically and spiritually.” Her mission was not the pamphlet’s distribution. Instead, it was the protection of women. Her conviction was eventually overturned and her case changed the legal course of the ACLU. Mary, influenced by her aunt Lucia Ames Mead, was a salaried field secretary for the MA Women’s Suffrage Association and later corresponding secretary for the National American Woman Suffrage Association in NY. 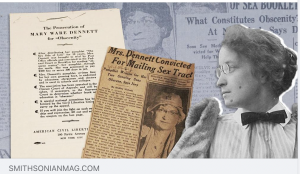 The Sex Education Pamphlet that Sparked a Landmark Censorship Case