Skip to content
By 1945, nearly one out of four married women was working outside the home. Nearly 350,000 American women also served in uniform. They rarely took home more than half of what their male counterparts earned.
It is estimated that women were responsible for the production of “296,429 airplanes, 102,351 tanks and guns, 87,620 warships, 47 tons of artillery ammunition, and 44 billion rounds of small arms ammunition.” 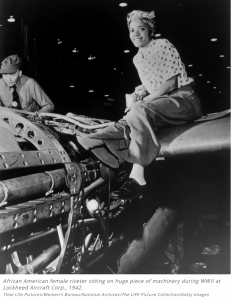 600,000 Black women, the “Black Rosies” or the “Invisible Warriors,” entered paid war service, but not before activists Mary McLeod Bethune and A. Phillip Randolph prompted FDR to sign Executive Order 8802 banning racial discrimination in the defense industry.
https://www.history.com/news/women-world-war-ii-factories-photos?cmpid=email-hist-inside-history-2021-1110-11112021&om_rid=&~campaign=hist-inside-history-2021-1110
Women of the WWII Workforce: Photos Show the Real-Life Rosie the Riveters