Since Washington’s reelection in 1792, presidential elections are held in even years.  It wasn’t until after the US Civil War that legislative elections were (mostly) held in even years as well.  Cost and turnout are the main reasons for aligning elections at the same time.  With few exceptions–MS, KY, NJ, LA, and VI–state and federal elections are not held in odd years.  Mostly, these states wanted to avoid Federal intervention and troops overseeing their elections.

Below is a schematic of the House seating in 1872.  Red is Republican, but back then the party had split into two 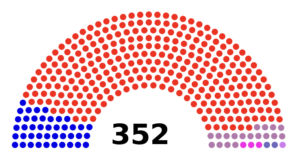