Ratification of 17th Amendment about the Popular Vote

Originally state legislators chose congressional senators. A striking example of how dysfunctional this process could be comes from Delaware 1895.  Their legislators were completely deadlocked and Delaware didn’t have a senator for two years. Read more>>> 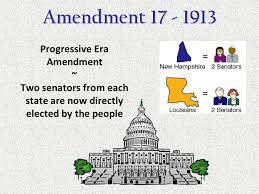 The Senate of the United States shall be composed of two Senators from each State, elected by the people thereof, for six years; and each Senator shall have one vote. The electors in each State shall have the qualifications requisite for electors of the most numerous branch of the State legislatures.

This amendment shall not be so construed as to affect the election or term of any Senator chosen before it becomes valid as part of the Constitution.

Ratification of 17th Amendment about the Popular Vote