Ratification of this 23rd Amendment about DC Electors

Amendment 23 was passed in 1961. A 1978 effort to ratify a constitutional amendment giving DC voting representation in Congress failed. Its text appears below.  Read more>>> 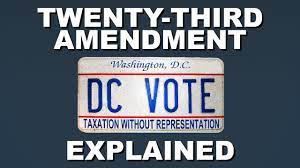 A number of electors of President and Vice President equal to the whole number of Senators and Representatives in Congress to which the District would be entitled if it were a state, but in no event more than the least populous state; they shall be in addition to those appointed by the states, but they shall be considered, for the purposes of the election of President and Vice President, to be electors appointed by a state; and they shall meet in the District and perform such duties as provided by the twelfth article of amendment.

The Congress shall have power to enforce this article by appropriate legislation.

Ratification of this 23rd Amendment about DC Electors