House Bill 87 would change the state’s definition “child pornography” to include graphic novels & animated films showing sex acts against children.  Jeanette Ward (R–Natrona) sponsored the bill based on her worry that such publication desensitize children to this type violence. The second part of the bill erases the immunity that educators and librarians currently have.

The article brings an example film to our attention, Heavy Traffic is live-animated and was released in 1973.  The movie’s producer also gave us the other classic film “Fritz the Cat” released in 1972. 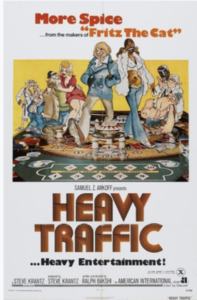 According to attorney Bruce T. Moats this definition was judged unconstitutional two decades ago.  Read more>>>

Could the bill to ban graphic books in libraries be unconstitutional?