Initially, Congress and the Presidency changed on the same day, March 4.  The 20th Amendment was passed in 1933 moving each earlier on the calendar.  Congress begins on January 3 and the Presidency on January 20.  The amendment also made clear that should the elected President die between the election and January 20, the Vice President should be inaugurated as a President would be.  The First Federal Congress in 1789 began on March 4 in deference to winter traveling and  shortening the decision time should there be a tie in the electoral college.   FDR was the last President installed on March 4.

The full text is long so it’s not copied here.  Read more>>> 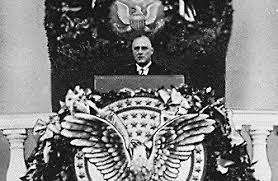