The College Board is field-testing a new course on African American Studies in 60 high schools.

Delilah Andrews, a Black mother of two children near Orlando, told WESH, the local NBC affiliate station, that the state’s action was disappointing. “It saddens me, you understand, because some of the children, they don’t get that African American history at home,” she said. 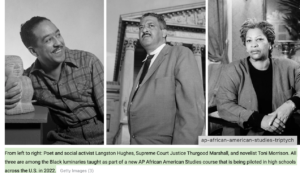 Quoting Gates Henry Louis Gates Jr., best known for his PBS show Roots, helped develop the AP African American Studies curriculum. “AP African American Studies is not CRT. It’s not the 1619 Project. It is a mainstream, rigorously vetted, academic approach to a vibrant field of study, one half a century old in the American academy, and much older, of course, in historically Black colleges and universities.”