Deborah Parker, the CEO of the National Native American Boarding School Healing Coalition, spoke during an often-tearful press conference. “Our children had names,” Parker said. “Our children had homes. They had families. They had their languages, their regalia, their prayers and religions.” Haaland and Parker referenced a recent study by researcher Ursula Running Bear, which found that adults who attended boarding schools now suffer from poor physical health. They also said Native people have the highest rates of suicides, children in foster homes and in the criminal health system. 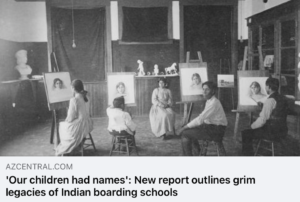